Math grades are declining in Canada. A must-read for parents!
1877-UCMAS-90

Math grades are declining across Canada… A must-read for parents! 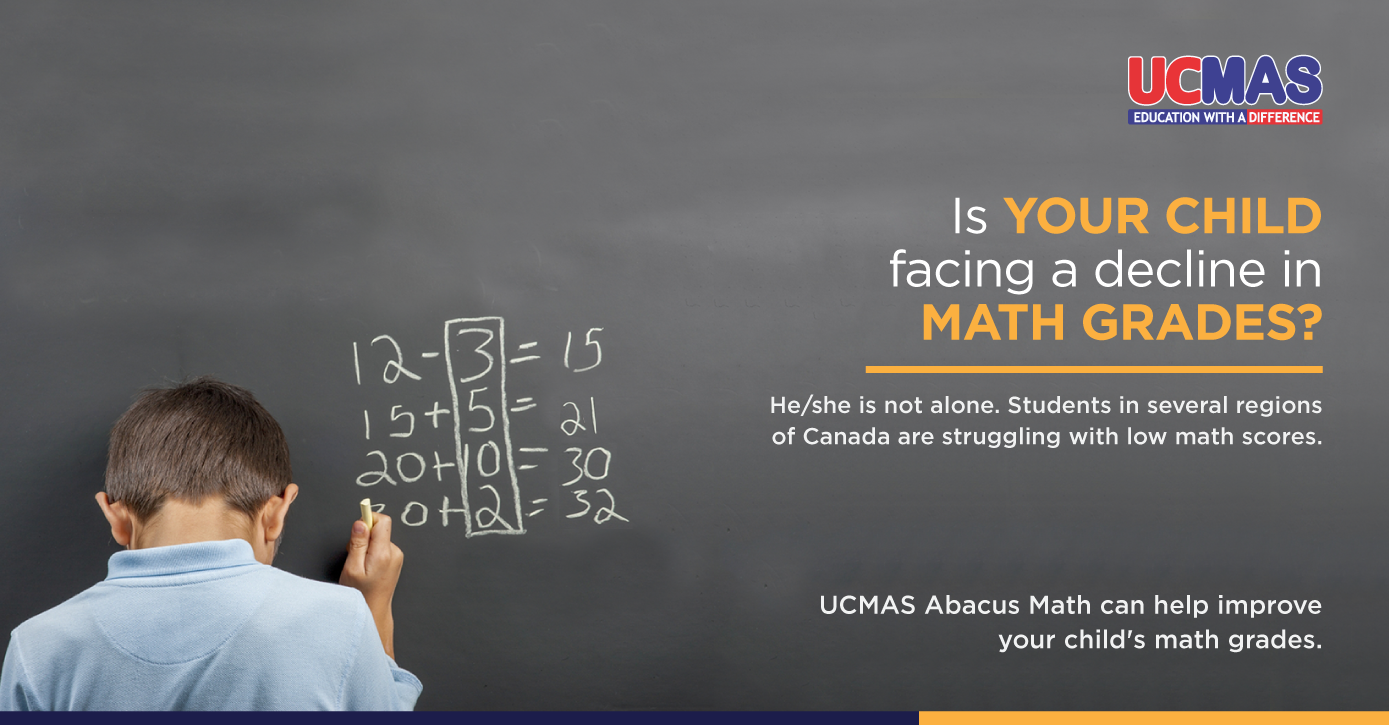 There has been a growing concern among parents, teachers, and policy-makers about the fall in math grades of children across several regions of Canada. Debates are flaring with arguments that revolve around the new discovery-based curriculum being the reason for the decline of math proficiency of Canadian children.

Math is not just related to calculations and numbers as the subject also instills abilities like logic, reasoning and problem-solving in children. So, the decline in math proficiency is linked to a child’s overall fall in cognitive skills. And, as a parent, if your child is also facing a decline in math grades, you should take corrective measures.

How the Abacus Math Program for Kids can help?

Abacus is an ancient tool used by the Chinese for doing basic calculations. In the modern era, several Abacus programs are being offered to children to improve their math skills.
An Abacus consists of countable beads for children to count and visualize numbers on a base-10 system. Children learn to manipulate those beads to perform several arithmetic calculations that include addition, multiplication, subtraction, division, square roots and more.
1) Faster and Accurate Math Skills

As a parent, you might be surprised to know that your child can become faster than a calculator in solving math problems. Yes, it’s possible. Children are initially trained to use Abacus for doing calculations. As they progress in their levels, they do not need physical Abacus and perform calculations mentally. Their calculations are fast and accurate. Hence, an Abacus Math Program for kids is an assured method to improve a child’s math skills.

It has been scientifically proven that right Abacus training can increase the brainpower of children. When children practice with Abacus using both their hands, they touch the beads and stimulate various lobes of the brain. During critical years, this helps in increasing cognitive skills that children use to think, read, learn, remember, reason, and pay attention. So along with math skills, right Abacus training can also act as a brain development program for kids.

It is a fact that Abacus trained children can replicate their success not just in math, but also in other subjects. They become sharp, accurate, and their confidence in math gets reflected in overall academics and extra-curricular activities.

One question that might pop up is that whether Abacus math conflicts with school math? It should be understood that Abacus training, while improving a child’s math skills, certainly develops brain capabilities and cognitive skills like focus, memory, logic, reasoning, application, etc.
With such enhanced skills, a child not only performs well in school math but also in other academic subjects. Parents, teachers, and policy-makers can certainly look forward to Abacus training to improve their child’s math and overall study skills.

UCMAS is the World leader in Abacus-based Mental math training. Widely recognized as the best math after school program, UCMAS has successfully trained more than 3 million children across the globe. For more information on UCMAS Abacus training, visit: https://bit.ly/31inmEJ  or call: 1877-UCMAS-90